About the Museum & Art Gallery

Brecknock Museum was started in 1928 in a building leased and then bought by the Brecknock Society. It continued to be run by the Society until 1951 when management was transferred to the then Breconshire County Council. With the creation of the county of Powys in 1974, the Museum was relocated in the former Shire Hall (Grade 2* listed) in the heart of Brecon and management was passed to Powys County Council (PCC). The Brecknock Society (latterly joined up with Museum Friends - BS&MF and registered as a Charity) has always assisted in the operation of the Museum.

The Brecknock Museum with its expanded Art Gallery has come to be recognized as one of the finest small museums in Wales. Its collections relate to the whole of the former county of Breconshire (Brecknock) and include nationally important artefacts such as the early Medieval log boat from Llangors Lake and an exciting art collection comprising work by many well-known artists (Thomas Jones, John Varley, David Jones, Graham Sutherland, John Piper, Josef Herman, Eric Ravilious) who, since the 18th Century, have visited or lived in this beautiful area. Over the years, the BS&MF has been actively involved in securing funds for the museum, often via art auctions.

In 2013, Powys County Council sought Heritage Lottery Fund (HLF) support, under its 'Connecting Communities and Collections' programme, for a very necessary refurbishment of the Museum. With Welsh Government encouragement and Powys CC lead, this became the imaginative y Gaer project to create a 'cultural hub' in which the renovated museum and art gallery took its place alongside a new Brecon library and a café, together with shared facilities for education and community use. See the Vision for y Gaer here.  Work began on site in August 2016 and the completed y Gaer opened in December 2019.  See the News posts for up-to-date information about the Museum and Art Gallery, including the y Gaer website. 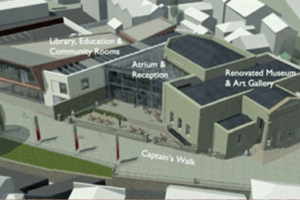 Together with the HLF, the Armed Forces Covenant Fund, the Welsh Government and the Brecknock Art Trust, another local charity, the BS&MF has been a funding partner in the part of the y Gaer project that renovated the Museum & Art Gallery in the Shire Hall. The BS&MF committed £195,000 towards the overall £14M project costs as a result of having sold the original Museum building in 2010.

In order to keep costs of the y Gaer project down, at what is a very difficult time for local authorities, some specific items were left out of the core y Gaer project, leaving a funding requirement for distinct 'additional projects'. Collectively, the partners in the y Gaer project have taken up the challenge of raising these funds - together currently totaling £300,000 - grouping them together under the title 'Enhancing the Visitor Experience'.

Your ticket for the: Brecknock Museum & Art Gallery