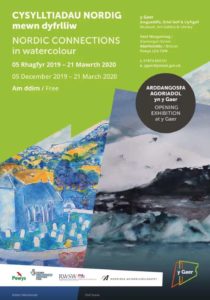 Opening on 5 December 2019 and running until 29 February 2020, the first exhibition in y Gaer will be presented by the Royal Watercolour Society Wales.

The society’s patron is HRH The Prince of Wales and he has kindly agreed to lend two of his own watercolours to y Gaer for the length of the exhibition.

The display will feature works by some of the best-known painters from the Nordic countries as well as from distinguished artists from Wales. It will include displays of an intriguing variety and diversity of subject matter as well as the different handling of the medium of watercolour.

The society, which gained its Royal status in 2013, has presented international exchange exhibitions in France, Italy and Nordic countries. In 2017 the Society organised a joint exhibition in Iceland with the Confederation of Nordic Watercolour Societies, which embraces artist members from Iceland, Norway, Sweden, Finland and Denmark.

The exhibition was held in the modern and prestigious Nordic House in Reykjavik and attracted great interest in all the Nordic countries. The Welsh society sought an equally impressive venue in Wales for a return exhibition and it was agreed that the new cultural hub in Brecon – y Gaer – would be a suitable host and that the exhibition would be y Gaer’s opening event.

Y Gaer is an exciting and inspirational development in the centre of Brecon. Opening in Spring 2019, it brings together the refurbished Brecknock Museum & Art Gallery with a brand new Brecon Library to create meeting and event spaces to stimulate the senses – space for poetry, music, reading, art and learning, with peaceful corners for study and contemplation.

Make sure to copy Registration number after successful submission.

Thank you for payment.

Your ticket for the: Royal Watercolour Society of Wales at y Gaer